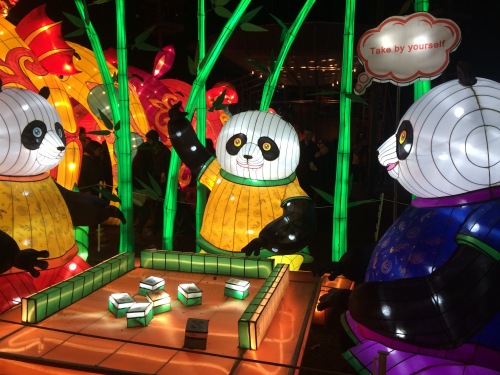 For the past several years, a traveling exhibit of LED-lit silk-skinned “lanterns” has come to our North Carolina town during the darkest period of winter. Last year on the night I attended the festival, the air was bitingly cold. Crowds were sparse. This year, on a clear weekend evening a good bit warmer than typical for early January, I ate an early supper, then put on a hoodie, drove to the festival site, parked in a free adjacent lot, and walked to the box office to get a ticket. I arrived a little after the festival’s 6 p.m. opening—once the sky was dark enough to provide a good backdrop for the thousands of lanterns and fanciful lit shapes.

I’d assumed that by arriving early, I’d “beat the crowds” and minimize my wait time to purchase tickets (cheaper at the gate than by internet) and then gain entry to the exhibit space. The wait wasn’t too long—maybe twenty minutes in all–but it turned out I’d arrived at the height of that evening’s viewing hours for multi-generational families. Rather than come later in the evening, they were enjoying the spectacle before youngsters’ bedtimes, at the same time taking advantage of reduced or free entry for young children.

The star of the show, a huge brightly lit dragon, again stretched along the shallows of Symphony Lake for a couple hundred feet. It was even larger and more intricate than last year’s dragon.  A few of the other exhibits were similar to what I’d seen previously, but arranged differently and with different emphasis.  New features had been added, too, including a set of large lantern “drums” near the entrance, with a real drum that kids could pound on to make the lights glow brighter. 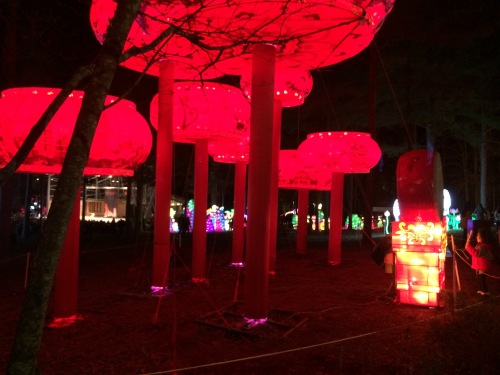 My favorite set of lanterns was “panda land.” I’d previously spent time in China in the region where pandas are native. This exhibit featured stylized panda figures in human poses—riding a bicycle or, my absolute top pick, playing the Chinese tiled game of mahjongg, a sort of cross between dominoes and the card game spades.  Periodically, performers on the festival stage did acrobatics or Chinese dances—I watched briefly, then went back to the pandas. This year’s lantern festival is nearly over. The weather for remaining evenings is predicted to be less pleasant than the evening I went.

If you live locally, I’d encourage you to go if you can. Too often these days our airwaves are full of insults, ricocheting threats, and fear mongering. Against this background, an outdoor stroll alongside others speaking many languages, all of us watching the whimsical uses we can make of our technologies when we’re not busy fussing with each other, is, dare I say it, priceless.