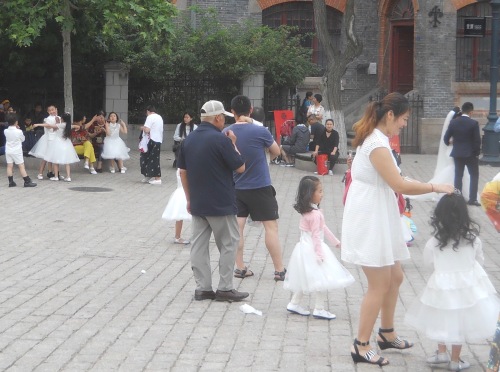 Last fall, one of our favorite former students in China emailed us exciting news—she was about to get married.  A few weeks later, our former student, “Mona,”  sent a second message with an attachment: a picture of her and her new husband in their wedding clothes.  Mona looked fetching, much dressier than the Mona I was used to—she posed, seated on a high stool, in an elegant flower-print dress with a brimmed hat to match. Her husband, decked out in a casual summer suit, looked over her shoulder.

For much of June this year, I had a chance to travel in mainland China and to reconnect with some former students and colleagues. Especially wonderful was a chance to visit Mona, whose new husband had been a high school classmate I didn’t yet know. They’d chosen each other after a long, sometimes long-distance courtship. I got to spend a couple of days with them. While I was visiting, Mona explained the logistics of arranging her wedding pictures, an increasingly common part of Chinese wedding preparations:

Few people actually buy clothes for their wedding pictures or have pictures taken on the wedding day itself, she explained. Rather, they rent dressy attire from specialized businesses and pick out a place and time to have professional still pictures taken, sometimes adding a brief video. They usually choose a historic or natural beauty spot, on a weekend day when both partners are off work. Because Mona is short for a woman of her generation in China, preparations were somewhat complicated. One weekend, she and her groom-to-be visited a rental agency and picked out clothes they liked in close to the proper size. The following weekend, they went back to the agency to pick up the clothes, which had been altered slightly for better fit.  On still a third weekend, she and her fiancé dressed in their rented finery and met a hired wedding photographer at the agreed upon site and time. Scheduling was tight and did not make allowances for weather. The day Mona’s pictures were taken, it poured down rain. The search for a “perfect shot” took most of a very long day and left both photographer and subjects tired and bedraggled. It took a fourth week to get the rental clothes dried, cleaned, and returned to the rental agency.

Not long after my visit with Mona and her new spouse, I ventured out on my own to parts of central and northern China where I’d never visited before. In the northern seaside town of Qingdao, I came across a cobblestone plaza more filled than usual with elaborately dressed Chinese.  Primed by Mona’s descriptions of her wedding picture adventures, I realized that what I was viewing were a whole series of wedding photo shoots. June is a prime wedding month in China, just as in the U.S.  I counted eighteen different couples having their wedding pictures taken. The weather was windy and blustery—gowns and photo accessories were hard to keep steady. A dozen of the brides were wearing western-style dresses in white, while others had flowing formals in red, considered a lucky color in China. For one set of pictures, an entire wedding party was assembled, including five or six young girls in frilly white dresses.

Over the course of this China visit, I noticed more and more young girls dressed in frills and bows, and not always in wedding groups. I’d see them on public busses, on trains and subways, in public parks. All were with at least one parent or grandparent. Often, a parkland family group would be taking selfies, the grandparents somewhat subdued in both manner and dress, the dads fairly casual, the moms dressier, anchored with the latest shoe fashions, the daughters often in white or pastel lacy dresses not much less formal than bridal finery. I crossed my fingers that the attention these girls were getting was a sign that the traditional stigma of having a daughter in China was lessening. None of the girls I saw looked neglected or abused. Many were far from docile. Most seemed valued family members, confident without being arrogant.

A few times, I saw girls and young women in less frilly outfits—on one park walk, the mom and dad in front of me strolled along at a normal pace, while their two daughters in trainers, shorts and tank tops raced ahead running sprints. At another public square, I noticed a young woman in jeans and a t-shirt with an English-language slogan: “Women are the Future,” it proclaimed.

My re-entry into the U.S. was through our 49th state, Alaska, where few women are shrinking violets. I saw the kennels run by the family of Susan Butcher, who’d earlier won the  long-distance Iditerod sled dog race four times.  I got to meet her elder daughter, now actively involved in training new generations of sled dogs for new challenges. Perhaps China’s daughters, and America’s, will one day soon be ready to take their places in a rapidly changing world that needs and welcomes their skills.