(Portions of this post have been adapted from my upcoming book, Where the Great Wall Ends: A China Memoir, due out later this year.)

A growing number of locations world-wide are sponsoring kite festivals. In the town where I now live, March winds bring out people of all ages, eager to enjoy the outdoors as winter ebbs, to search for just the right spot and orientation to launch their creations skyward. The basic homemade wrapping-paper-and-balsa-strut diamond shaped kites I flew as a child pale in comparison with the elaborate heirloom and contemporary kites that participate in some of these festivals. A quick internet search turned up an American-based kite flyers association with members in 25 countries, with at least one U.S.-based festival in every month of the year.  (http://kite.org/activities/events/event-calendar/)

One blustery spring day in 2000 on Tiananmen Square in Beijing, China, I got to see a few of the world’s most cherished, most elaborate kites. My husband and I were partway through a tourist stay in Beijing. Our first two days had been filled with organized guided tours: the Forbidden City, a nearby section of the Great Wall, the Summer Palace, some of the subterranean tunnels built under the modern city during the 1960’s and 1970’s to shelter residents in the event of a bombing attack by “the Soviets or another country,” as our tour guide put it. Now we had a free day to explore on our own. We decided to return to the vicinity of Tiananmen Square.

As we approached, we noticed several box kites bobbing and weaving in the sky above.  Once on the square itself, we found several older men preparing their heirloom dragon kites for flight. The kites, nearly fifty feet long, had extensive tails made of circles of paper glued to lightweight wooden rings, all linked together by three parallel strings that ran the kites’ entire length and could be used for steering. The rings were decorated with sturdy feathers for stability. Only when the tail was almost fully aloft was the dragon-shaped head of the kite attached and quickly pulled skyward. We watched until our necks cramped from craning upward. We had little language to express our amazement—Jim gave a thumbs up sign. Perhaps our rapt attention was language enough. 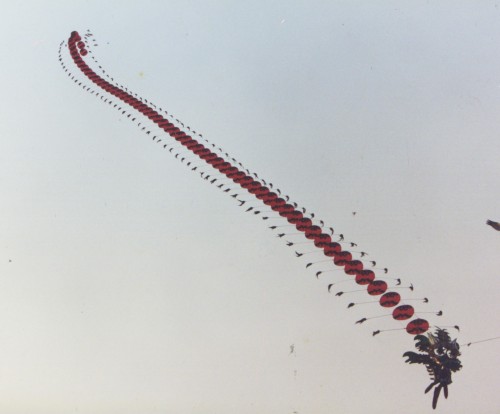