A friend asked a group of us last fall to write a poem or lyric about a favorite memento. Before his memory was badly damaged by Alzheimer’s, my father in retirement took up knitting and crocheting, making scarves and blankets and afghans, giving at least one to each of his children. He also used his carpentry skills to make furniture out of pieces of wood he’d found on beaches and in woodland walks. Dad’s spirit persists, and we cherish the mementos he left us.

My father’s afghan’s worn, a loop pulled here and there,
But when I shrug beneath it, it envelopes me like prayer.
Dad’s gnarled hands were large, his knitting needles clicked–
They timed his slowing rhythms in a world obsessed with quick.

My father’s lamp burns bright, its bulb and shade are new,
Its base a set of gifts from autumn forests he walked through–
A branch entwined with vines, an interesting grain,
Within the lamplight’s glow I see those autumn woods again.

As his memory gradually died,
Confusion mocked Dad’s earlier pride–
His steps grew halting, his eyes grew dim;
By the time his body quit, there was little left of him.

My father’s spirit rests, his good and bad days done,
His ashes fondly buried near the house he last called home.
His legacy lives on, in loving songs like mine,
In crafts, and in concerns he shared with those he’s left behind. 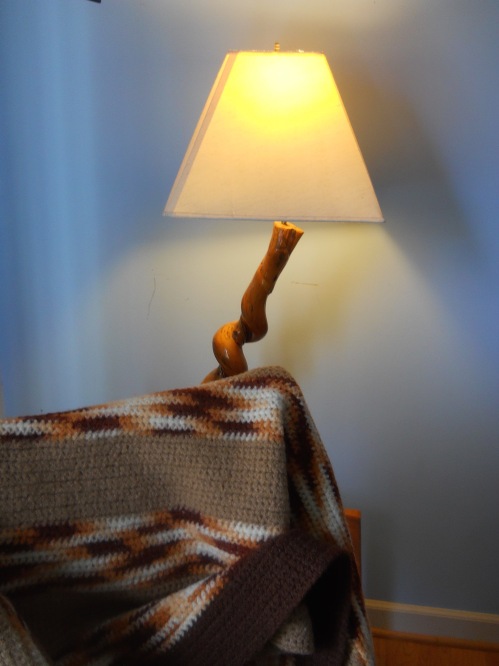 One response to “My Father’s Afghan”