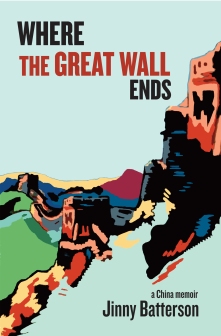 In May, 2018, I finished the initial self-publishing process for a memoir of my interest and experiences with mainland China, a book long in the making. Following conventional advice, I hosted a “launch party” for Where the Great Wall Ends at a small local Chinese restaurant, inviting lots of friends and acquaintances. Nearly twenty people showed up, including my primary editor and my book designer. Guests listened politely to my book introduction while munching egg rolls and sipping tea. Several attendees bought copies of the book. Seeing the book actually in print and having people actually purchase it was magical to me. Not quite like birthing a human child, but still a labor of love.

After this initial marketing effort, I pretty much left the book on its own, intermittently sending out a review or gift copy, hoping for a referral or two. Sales have dribbled in. I donated multiple copies to our local public library system. Some have gotten checked out. Recently I put up a very basic book version on Kindle, though my knowledge of Kindle formatting conventions is rudimentary. The preview on my non-Kindle laptop had lots of extraneous editing marks and some formatting glitches at the ends of several chapters, but the Kindle price is less than half that of the print version.

As this year’s holiday gift-giving season approaches, I’m sending out an appeal for additional readers and/or purchasers. The promise of untold wealth from royalty payments was not part of my motivation for writing the book, but I would like to reach a wider audience than what has materialized so far. Whatever our China experiences or political persuasions, I believe it’s important to make some efforts to understand this big, diverse country, including its long history and its natural environment. China occupies many of the same latitudes in the northern hemisphere as the United States; its land area is roughly the same size. Its culture, geography, and resources are quite different from those of the U.S. Of course my perspective is limited, but I’ve had nearly forty years of intermittent tourism, travel, and teaching in many parts of China to draw on as I crafted my narrative.

If you have a China-interested or China-background relative or friend, please consider Where the Great Wall Ends as a possible gift. If your monetary resources are limited, please consider checking out a copy from a Wake County, NC library branch, or, if living elsewhere, requesting a copy via interlibrary loan.  Very best wishes for the upcoming holiday season, whatever your background or traditions, and many thanks for your interest.

This entry was posted in holidays, travel, Uncategorized and tagged China memoir, contemporary China, nature in China, self-publishing, Where the Great Wall Ends. Bookmark the permalink.

One response to “China Memoir–Launched and Languishing”