Living at the Bottom of a Hill

Living at the Bottom of a Hill    —by Jinny Batterson

When we first purchased our most recent home, I didn’t pay a lot of attention to its topography.  Mostly I noticed that it was within easy walking distance of the home where one of our grown children then lived. Another plus to our downsize-for-retirement condo was that it was only about 10 minutes’ drive from our regional airport—a boon for visiting further-off family and friends. It sat on a small lot on one of two adjacent loops of privately maintained road near a major interstate in the central North Carolina piedmont.

I soon warmed to the flexibility and freedom that living in a condo afforded: exterior maintenance, including most lawn care and landscaping, was handled by our homeowners’ association for a small monthly fee. Because our unit’s previous owners had been handy do-it-yourselfers, initially we had little indoor maintenance, either. For the first couple of years we owned the place, we spent as much time away from it traveling as we did “at home,” finding it in good shape whenever we returned.

It was not until my first year of living in the condo full-time that I discovered a few downsides to our new living quarters. Along with the maintenance provided by the condo association came a good many rules and restrictions, some of which I learned about only after violating them. Then there was the smallness of the yard—rather than the previous acre-plus I’d had to garden in, the area of land that went with our unit was tiny: a small sliver in front and another small sliver with a northern exposure in back between an overhanging deck and a common area of woodland. The worst, though, was storm drainage.

The four-unit building where we had one of the middle units sat near the bottom of a rather steep hill. Whenever we had what my mom would have called a “gully washer,” puddles formed along our front walk. Water seeped through our unfinished basement, whose back area of concrete slab was about ten feet lower than its roughly graded dirt-floored front. Rainwater from buildings further up the slopes came rushing down, washing away sod and lawn, silting in our minuscule back yard, causing deepening gashes in the landscape, piling up gravel and debris against bases of trees in the woodland commons, accelerating disease and decay. 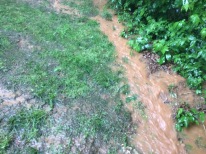 Walking or driving in other areas of our hilly town, I took note of large scale efforts to deal with this “bottom of the hill” effect: retaining walls twenty or more feet high, stream buffers of woodland and brush, gravel or paved greenways along creeks, truckloads and truckloads of rocks and pebbles dumped along steep slopes and into low-lying areas, retention ponds of many sizes and shapes.

I became a late-life-learner about the rudiments of smaller-scale erosion control—appropriate landscape plants, rain gardens, check dams, terracing, mulch, mulch, and more mulch. Within the confines of our HOA’s covenants, sometimes to the annoyance of my neighbors, I’ve tried to find ways to reduce storm run-off and redirect it into less destructive channels. Progress is slow and intermittent. My guess is that there will never be a permanent solution, and that as the climate continues to change, the challenges of living near the bottoms of hills will become more severe.

Still, I’ve decided, there’s no better landscape in which to live. Flat areas can be just as damaged by prolonged rain events as hills. (Remember 2016’s Hurricane Matthew in eastern North Carolina or 2017’s Hurricane Harvey in Houston?) Living on the crests of hills or mountains poses other challenges—water supplies do not arrive uphill unaided; lightning favors ridge tops. So I’ll keep working at stewarding this little plot that is mine for a time. By and by, the gullies may wash less destructively.