Happy (Western) New Year!  As global cultures mingle more often, more of us Americans of all backgrounds are getting exposure to holidays and calendars celebrated elsewhere.  For the past three years, a traveling exhibit of lighted silk-skinned “lanterns” has come to our North Carolina town during the darkest period of winter, a little earlier than the period of “Chinese New Year,” which typically occurs in late January or early February and includes a lantern festival on its final day. 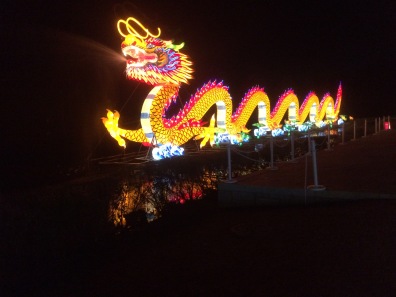 Yesterday I braved colder than normal temperatures to see this year’s display at a local outdoor amphitheater that otherwise would be shuttered for the season. This year’s North Carolina Chinese Lantern Festival was bigger and better than ever, its signature lake-surface dragon periodically spouting water rather than fire into the frigid air.  Weather had diminished last night’s crowds somewhat, but not the enthusiasm of those who braved the elements, sometimes fortified with spiked hot chocolate or coffee. Most of the twenty-five major complexes of lights had placards describing them in both English and Chinese.

“Lantern festival” in China is an old celebration, thought to have originated almost two thousand years ago, celebrated at the first new moon of the lunar new year, the final day of the two-week Chinese Spring Festival celebration.  According to legend, a leading Chinese deity, the Jade Emperor, was angry with villagers for killing a crane, one of his favorite birds. He planned to send down fire to destroy the village, but the villagers, warned by the emperor’s daughter, hung red lanterns around their houses, set off firecrackers, and lit bonfires in the streets, tricking the emperor into thinking the village was already on fire and thus saving the village. Ever since, in towns and villages throughout China, people parade with lanterns on the evening of  Lantern Festival.  If you have a chance to see the North Carolina version, please wear plenty of layers, and prepare to revel in winter light.