A 49th State of Mind

A 49th State of Mind   —by Jinny Batterson 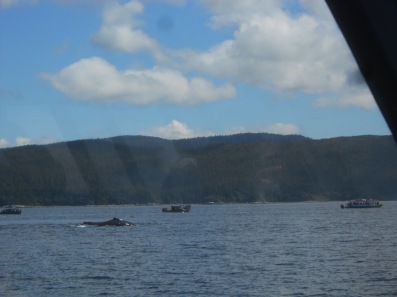 humpback whale diving after being part of a cooperative “bubble net” near Juneau, Alaska

Alaska is huge. Alaska’s human population is sparse, with overall densities of only about 1 1/3 people per square mile. (For comparison, if New York City had the same population density, it would have just over 400 people.)  Nearly half of Alaska’s roughly 700,000 folks live in or near its largest city, Anchorage.  In some years, according to wild game estimates, Alaska has more caribou than people.

Over 2/3 of the land area of Alaska is owned by the U.S. government. Its most famous park, Denali National Park, though not the state’s largest, still covers as much territory as the entire state of Vermont. Through both military and civilian jobs, the U.S. government is the largest employer in the state. The petroleum industry is also a major sector. Tourism provides a boost in the state’s more accessible regions, with the population of greater Anchorage roughly tripling during the summer tourist season. Alaska produces low-sulfur coal, precious metals, and seafood for export. Alaska has over 4 times as much ocean coastline as second-ranked Florida, and nearly twice as much shoreline as the Great Lakes state of Michigan.

To me, an Easterner with only occasional jaunts west of the Mississippi, Alaska was too much to get my head around. In my 2-week visit, it was impossible to take in the immensity of the place. Partly via packaged tour, partly courtesy of a former high school classmate, I did get to see a small portion of southern and central Alaska.

Arriving in Anchorage on a summer weekend, I went for a ramble through a downtown street fair. Most of the stalls sold food, crafts, or fabulous photographs of the local flora, fauna, and scenery. Near the end of one aisle was a t-shirt booth. Some shirts just showed superimposed maps to scale. Others included text: “Texas is so cute,” one shirt read. “If we split Alaska in half, Texas would become the 3rd largest state,” proclaimed another.

What most impressed me about Alaska, though, were not its huge swaths of empty acreage or its magnificent mountain vistas. What I was most drawn to were its waterways and sea life. My camera finger was not quite quick enough to capture the spectacle of eight adult humpback whales and one calf “bubble net fishing” along the Lynn Canal near Juneau, but the experience was magical. Bubble net fishing can be engaged in either by solitary humpbacks, or as a cooperative effort by temporary groups of up to 15 whales who’ve learned a more productive way to fish.

Research about whale feeding behavior continues, but based on studies so far, it seems that cooperative bubble net efforts are usually led by an older female. A bubble “net” can be cast starting up to 60 feet underwater. Multiple whales exhale while swimming in circles around a large school of fish, creating a cylinder of surface-bound bubbles.  The whales also emit a curtain of sound, audible to underwater sonic devices. Schools of herring and/or other small fish are confused and frightened by the bubbles and the whales’ vocalizations. Most remained trapped in an ever tightening net. Gradually the whales and fish move inward and upward, until all break the surface in a huge explosion of open-mouthed whales and silver-sided fish. Swarms of gulls swoop in to pick up the scraps.

My prior images of Alaska were of rugged individuals—solitary survivors of harsh natural conditions, perhaps hoping to strike it rich during a gold rush, or braving winter blizzards to win a sled dog race. This is part of the Alaskan ethos. But it is not the whole. There are also the whales—once hunted to near-extinction, these huge mammals have benefited from whaling restrictions. They also have learned that it can sometimes be in their best interest to cooperate.